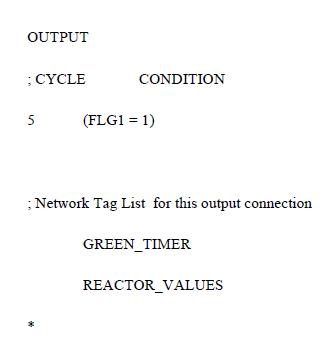 Each connection has a starting line, on which two fields are defined. The first field is the cycle time, which controls how often the conditional will be executed. If the cycle field is 5, for example, then the conditional will be checked every 5 cycles of the program. (Note that cycle lengths are defined in the header section, as documented above.) The second field on the starting line is a conditional, enclosed in parenthesis.

In the preceding example, the meaning of the connection is as follows: Every fifth cycle, check to see if FLG1 is ON. If FLG1 is ON, then check all the ONSPEC values associated with GREEN_TIMER and REACTOR_VALUES for changes. If any of these values have changed since the last time the value was sent out, then send the new value to the master workstation.

IIt is not necessary to put the OUTPUT keyword into the file more than once. Every connection listed after this keyword will be assumed to be an output connection, until a different keyword is found.